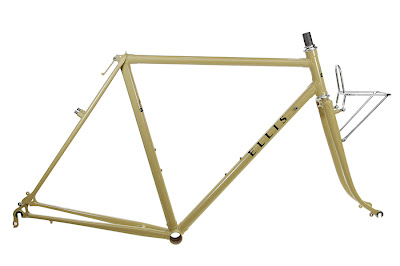 Well, if you've been watching my blog you would probably conclude that I haven't been building anything lately. Actually, I've been quite busy in the shop and just haven't made the time to update all the recent projects I've got going. Here's a start!

Just got Jon's 650B rando frame back from paint last Mon. Drew took the glamour shots and here they are!
The custom built front rack. It has a threaded boss for the fender mount in front and then two bosses on the side for a nifty LED flashlight mount. This frame and Selena's frame are also unique in that the head tube logo is painted on, as opposed to the decal that I've been using up till now. It allows for more customization of the paint schemes than ever before. 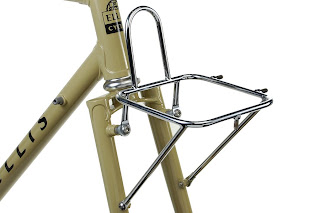 The bottom bracket. That chain stay bridge looks really far back, but with the 450mm chain stays and the 650b tires it's just right. In the bb, I've drilled two holes, one for the cable guide to bolt onto, and a larger one for water drainage. 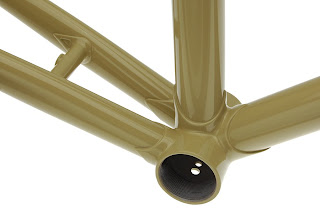 Kinda basic rear dropouts, but I added stainless faces to the dropout and the fender mounts. The seat cluster. I usually do a little one sided canti brake stop, but Jon really liked this look. Fab'ed it out of some 4130 rod and a split guide brazed on. Easy to slip the housing out of the stop to release the Mafac Raid brakes that Jon's going to be running. 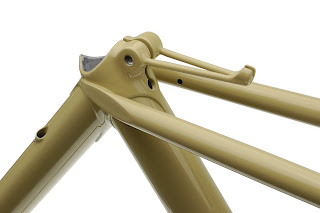 Like I said, I've been busy. Look for updates on Chad's cool bi-laminate lugged triathlon frame soon and Eduardo's stainless lugged frame which is heading to paint today!
Cheers,
Dave
Posted by Dave Wages at 9:33 AM