Finally back to work buildin' frames after a long break for NAHBS. Feels good!

First up is Carl's multi purpose cross frame. I went with an old school Columbus SLX tube set and a set of Long Shen's Cinelli copy lugs. We're going for as much functionality as possible, so I used some of my old Campy 1010a dropouts so he can run it single speed or geared and I added a bunch of braze ons to hopefully cover any eventuality! 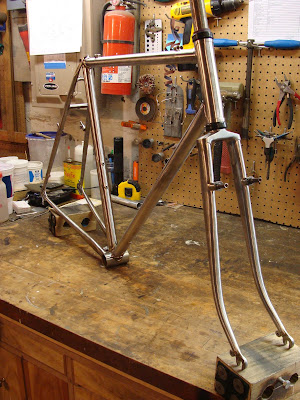 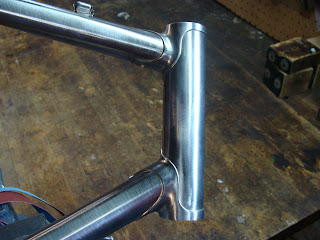 The seat cluster area, lots of stuff going on here. You can see the top tube cable routing, (which I don't normally do), a beefy canti brake bridge, and the hidden rack mounts on the inside of the seat stays. What you can't see here is the internal routing for the front derailleur cable. Since Carl was only going to run a front changer infrequently, I routed it under the top tube internally. This way, when it's not being used, you don't have open cable guides except the one on the back of the seat tube.

The seat stays are the only non SLX tubes, I upsized a bit and ran some double tapered 16mm's instead of the 14's that come with an SLX set to better handle the canti brakes and a potential rear rack. I really tapered the caps as well so the stays don't look quite so beefy where they meet the seat lug. 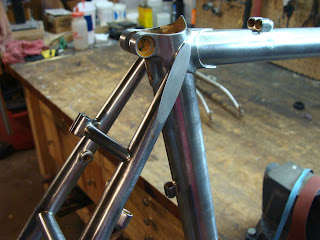 I bumped the chainstays pretty deep for lots of extra tire and fender clearance. You can just spot the boss in the bridge for mounting a fender and the 3rd set of water bottle bosses under the down tube. 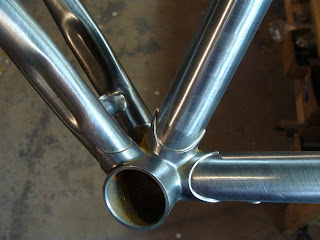 Oh yeah, the vintage Campy dropouts. If you look close you can see the pitting from some years of rusting away at the Paramount and later Waterford shop. Saved a pile of these from the dumpster during my Waterford days. A little vinegar and salt soak and they're ready for action! 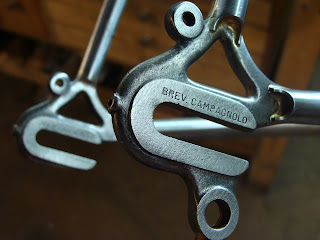 I've mentioned before that Caitlin was nice enough to let me hold onto her frame for a couple extra weeks so I could show it at the NAHBS in Richmond. Well, we're back, and she made the trip from Madison on Sat. to pick up her new Ellis. Didn't waste any time getting it built up either! I'm looking forward to a ride report soon. 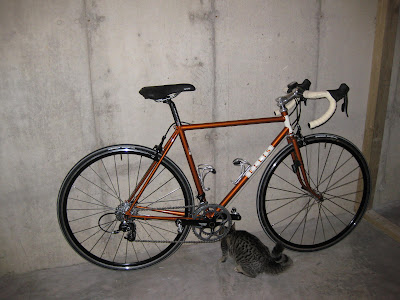 As you can see, Caitlin has her own version of the Ellis Cycles "Inspector".

Posted by Dave Wages at 1:25 PM No comments: 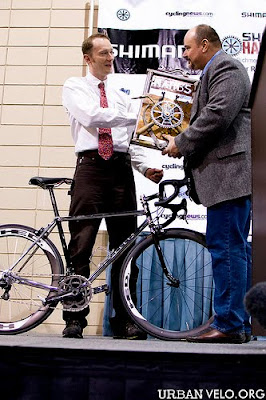 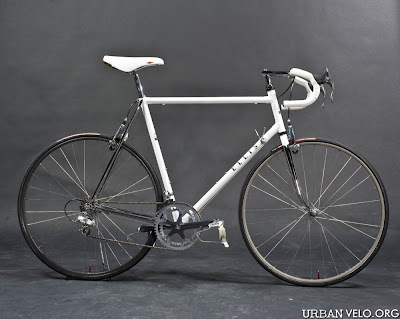