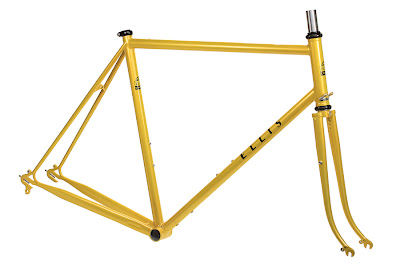 Everyone owes it to themselves to have a road bike that can run fat tires! I've done a few of these over the last couple years, Carl's bike comes to mind, but his was more of a cross bike with lots of braze ons. This one really just mimics my road bike's position, but it is built for long reach brakes, (47mm-57mm) and it can fit 28c tires with fenders, and even 34c cross tubulars without fenders.
I've slowly become a convert to fatter tires over this past season, as the 25's and 28's take the sting out of the not so fine old roads around Waterford. The real surprise is that I'm not going any slower for it. I know I'm not the only one who's experiencing this, and there's more and more nice wide tires that are coming on the market for this.
Ok, ok, enough of my blabbering! Let's see some pics. 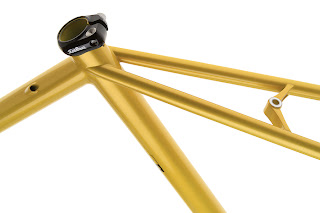 I used an externally butted seat tube and the Salsa collar may not be the most classic looking part, but it clamps like a mother! 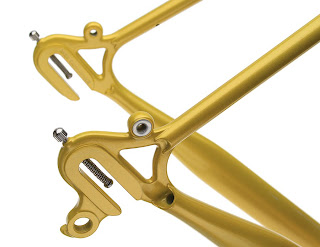 One of my other justifications for building myself a new bike was to replace my single speed. While I love that bike, I really built it with the idea that I might actually use it on a track someday, so it's much more steep and short than I'd typically build for a road single speed. And after a couple years and no track riding, I figured it's time to face reality and build a bike that's more useful. That's why I spec'ed the Campy 1010a dropouts, it allows me to run the bike single speed when I want, but since the cable routing is internal, there's no unused braze ons hanging out when it is set up single. 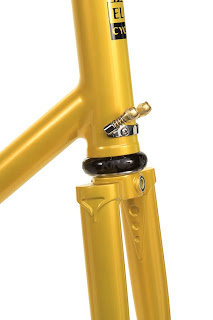 My other tricky part for the single speed conversion is the bolted on head tube cable stops. It's a nifty little stainless steel part I found on a supplier's website and it's just the ticket here.
If you look close you can also see the little bit of lug work I did on the fork crown. Not many opportunities to do lug carving on this one, but I like the little touches that you really have to look for. 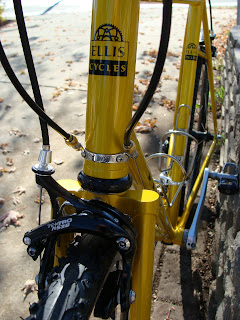 Another shot of the head tube cable stops on the built bike. I've got some Continental Travel Contact tires on there right now, and while they advertise them as 37's, they're more like 32's with a taller tread. 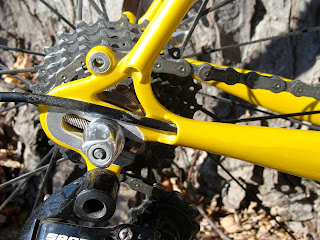 A shot of the internal chainstay cable routing, and the SRAM Apex rear derailleur that helped me get my butt up the hills at D2R2 this past summer and that'll be doing it again next summer! Maybe I'll even do the 180k! 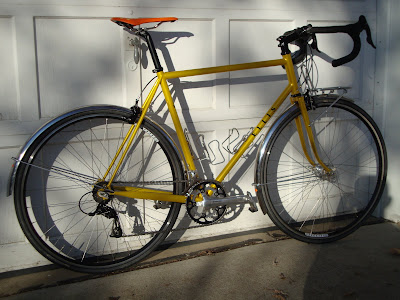 My other sneaky bit on this frame was to add some mounts for fenders so I can use it when the weather's not so pretty, and you'll notice my Nitto M18 rack on the front. The pic above is the bike set up with 28c tires, stainless Velo Orange fenders and the rack. Not a full on rando bike, but it might do in a pinch. 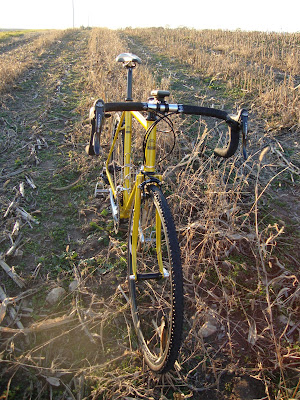 I was out riding last week and snapped a few shots of the bike propped up on some stubble in a corn field that had just been harvested. 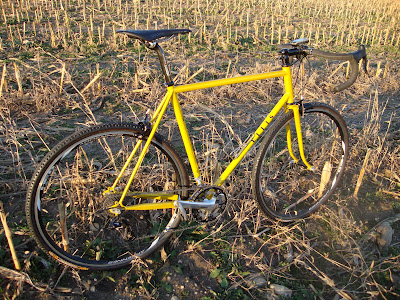 That yellow just jumps out of the pictures. I think the camera has trouble knowing what to do with that color!

Rode it up to Estabrook park this past Sat. on a chilly (40's), but sunny day. Got there in time to catch some of the last cross races of the day and witness James' brother Marco crush in the Elite Men's race. Everyone else was racing for second! (No pics though, I forgot the camera!) 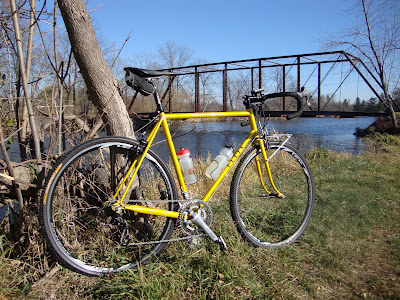 Finally, today we had some unseasonably warm weather blow in that's supposed to hang on until Wed or Thurs. 60's and sunny, albeit with a bit of wind from the southeast, but after I angled my way down into Kenosha county, it made for a nice tailwind all the way home. Almost 50 miles today!
Cheers,
Dave
Posted by Dave Wages at 4:02 PM

Love the whole concept of this bike Dave. But, you know me. I like me some fat tires. The smallest tires I run on any of my five bikes are 32's. And that's on my Ellis.

I am really loving this bike. Great work Dave.

oh dang, thats the bike i've been looking for! Dang. you know, i'm not sure anymore if you need a full rando bike to do a brevet. i think for 200-300k's, a "normal" road bike with comfy tires is fine. good job dave, i love the slight cut in the fork lug.

Where did you find that bolt on head tube thingie? I would love to find one
thanks
r