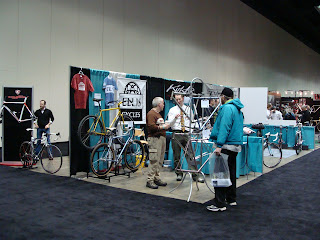 We made it home last night in one piece in spite of some snow squalls around Chicago which threatened to bring traffic to a standstill. By the time we got to the northern suburbs the snow let up and thankfully the rest of the trip was uneventful.

It was an exciting weekend in Indianapolis! and I have to thank everyone who helped make it a success for Ellis Cycles. Paul was kind enough to bring his recently completed single speed so I could show it off on Fri. afternoon and Sat. and I got lots of complements on both the frame and his build. My brother Steve has worked really hard getting the website together, printing all my cards and putting together press kits and the photo book I had in the booth.

There were also lots of my Milwaukee and Wi. friends who made the trip and stopped by with support. Thanks, to Jon, Scott, Pete, Jaime, Russell, Rick, Andy and everyone else I can't remember now.

And finally, a special thanks to my wife Lisa for all her help schlepping boxes, taking photos, and generally putting up my bike show insanity over the last couple months. I hope I can repay here with some success and a little more stability in the upcoming months and years to come.

OK, enough the sappy acceptance speech! Here's my photo post win for the 2009 "Best Lugged Frame". I usually don't like photos of myself, but I'm alright with this one, maybe it's because the frame distracts from the goofy mug holding it! 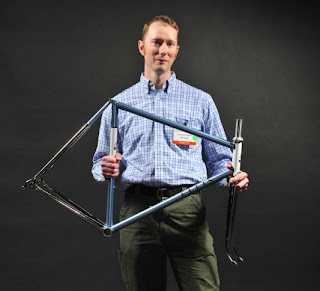 I'll post more photos soon of the rest of the bikes I brought to the show, so stay tuned.
Posted by Dave Wages at 2:32 PM

Congratulations on the win Dave!! I'm very happy for you. I sat around at home all weekend trying to figure out why I didn't decide to attend this year. I missed out on a great show from what I've read so far.

Well deserved Dave! I was great meeting you. Come back to Indy anytime.
Craig

Congratulations Dave!! A much deserved win. I'm glad I finally got to see your bikes in person.

Congratulations Dave! It's a beautiful frame that I sure wish I could see in person. Way to go!

Everyone wants to see more pictures of this thing, including the owner: ME!

Keep your shirt on.

Nice going Dave. Having seen you work from start to finish, I know it is well deserved.

Having seen your work in person, I know why you always walk away with a trophy in your hand!

Congatulations Dave!
It was good meeting you at the show and I was glad to here about your win! Talk to ya soon.