I have to apologize to the folks who've been checking in on the blog periodically. I haven't been updating as much as I should, but time marches on at Ellis Cycles.

I've been working on a couple projects that I hope you'll all find interesting, and now I'm awaiting a fresh shipment of tubes and lugs for some new bikes.
Here's a couple shots of a stem I built recently for Tom, he wanted something like the old steel Cinelli stems. 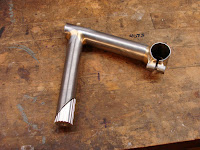 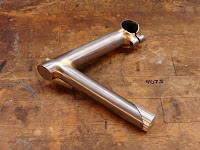 Also finished up Mike's 953 frame, I showed this one raw at the NAHBS, but I've been waiting for a few months for the stainless fork crowns to arrive. Finally showed up a couple weeks after the show, so now it's ready for final polishing and then paint. Stay tuned for finished pics of this one, it should be a pretty one. 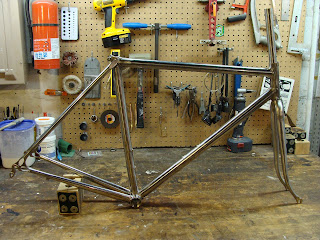 Another NAHBS frame was Larry's fillet brazed S3 tubed frame. I just had to finish it up and get an Edge fork for it and it was off to Jason's for paint. He's been working on a special Baltimore Oriole inspired paint job (the bird, not the baseball team), so it should be interesting to see what Jason and he come up with. 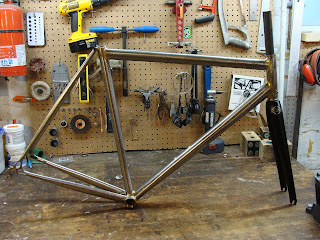 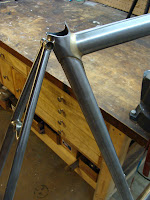 A close up of the bi-laminate seat cluster.
Posted by Dave Wages at 9:13 PM