Well, on Tuesday Steve was nice enough to round up some of the local guys for a ride that he calls Rose Valley. I pictured riding through pristine valley covered in wild flowers, but as it turns out, we never even go to Rose Valley on this ride, we just turn around at the road that goes to there. That being said, it was an amazing ride!

We started from Patagonia in Ventura, so roughly sea level, and started to head inland and upward. The early miles were rolling, but all pretty much tilting up to some extent, and once we had ridden about 15 miles or so, the real climbing kicked in. Mark rode alongside and stressed that I should take it easy and pace myself as the climb proper would take about an hour, but even that was hard to process, not sure I've even been on a climb for that long? Well, he wasn't kidding, after a short steep section at the start, the grade settled down and we quickly split up to climb at our own pace. While it was easy at first to spin a 19t cog, as the miles wore on, I found myself working my way up to the larger cogs as the miles and elevation piled up. By the top, I was using that 28t quite a bit more than any of the others!

I regret now that I didn't stop a couple times to take pictures, the scenery from the numerous switchbacks was incredible, but I was worried that if I stopped, I'd have a heck of a time getting going again! 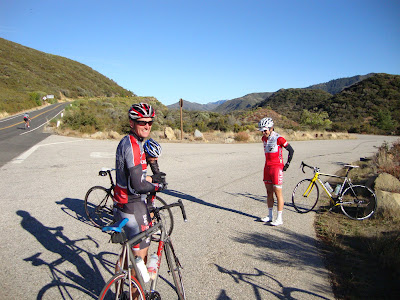 Here's a shot of the road to Rose Valley, aka our turnaround spot at roughly 3500" of elevation, and Ben, Steve and Mark waiting for the rest of us slowpokes! Chris apparently didn't get enough climbing, as he's in the distance heading up a bit more of the remaining climb. 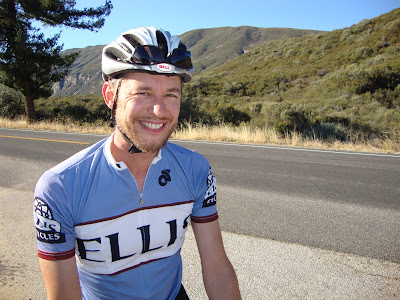 Steve rolled in a just a bit after I got there, not looking too much the worse for wear. After we all regrouped, it was time for the downhill back home, and that was a BLAST! I should have kept track of how long the climb took vs. the descent, but my GPS was acting a bit sketchy in the canyons yesterday. It sure didn't take long to get back down, and even after we got off the mountain proper, most of the way home was downhill as well, so we were making pretty good time. 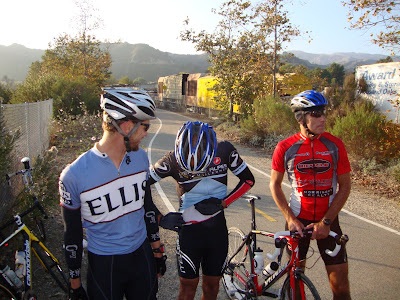 Unfortunately, with just a couple miles to go, Steve flatted his front tire just before a quick turn in the bike path, and he took a tumble right in the middle of the group. Thankfully, there didn't seem to be any serious injuries, and no one else went down either, so that's good. Above is a shot of Steve checking to make sure everything is still where it's supposed to be! 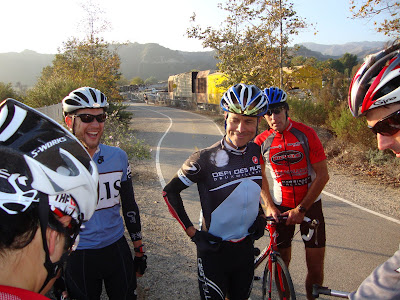 Nice fist sized hole in that jersey though! There's my brother laughing at the poor guy! ;-) 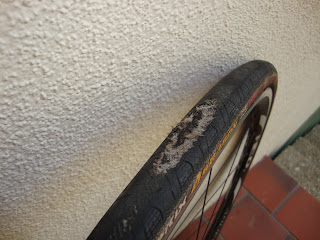 As we were loading the bikes back up in the car, we noticed that Steve had skidded right though his rear tire trying to avoid the "other" Steve's crash. That tire is toast!