I've managed to escape the fast approaching Wisconsin winter by heading out to visit my brother Steve in sunny Ventura, CA for a week. I've been to Ventura quite a few times in the past, but I've never had my bike with me to try any riding out here, so this trip is a first in that respect.

When I got here on Sat afternoon, I had just enough time to get my bike unpacked and back together in time for a quick shakeout ride with Steve. It was kinda gray and windy, and we got sprinkled on a just a bit as well, but it still felt great to be riding in the warmth.

As for Sunday, the weather cleared up and as you'll see in the photos, it was beautiful and sunny for our whole ride. We got together with Steve's friend Mark around noon, and headed out toward Santa Paula and later Fillmore on 126. The wind was blowing in off the ocean and so we had a decent tailwind pushing us inland, and it also doesn't hurt to have Mark pulling, as he's a Cat 1 racer on Team Clif Bar! Once we hit Fillmore, we turned right and started heading for Grimes Canyon, and what had been a pretty flat fast ride was about to get quite a bit more vertical... 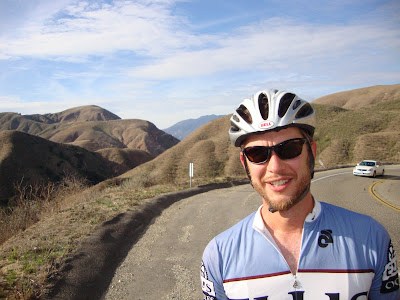 As soon as the road started tilting skyward, Mark dropped Steve and I like a bad habit, and about halfway up Grimes Canyon we stopped for photos and I took this quick shot of Steve in his snazzy Ellis kit. 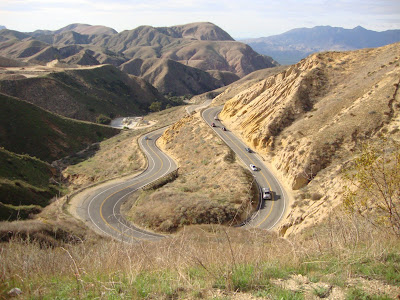 Near the top, I stopped again to take a couple more quick shots of the winding road up the Canyon. Now I probably didn't have to stop, but taking a photo was a nice excuse for a break from suffering on the climb for a few moments! After plummeting off Grimes, (one of my strong points, seeing as how I weigh about 30-40lbs more than Mark and Steve), we continued our loop toward Balcom Canyon road, and while it was certainly shorter than Grimes, the last bit was much steeper! I needed to go to my "Suitcase of Courage" for this one, and luckily I had just enough to get to the top. Once again, Mark dropped the Wages boys, but he was nice enough to wait for us at the top. 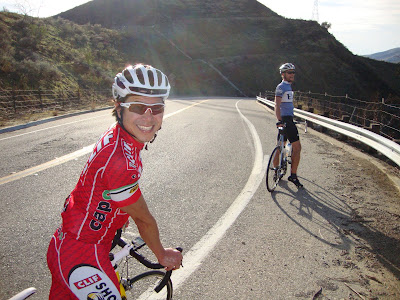 Here's a shot of Mark and Steve waiting to head down from the Summit of Balcom Canyon Road. I will admit that I'm glad we came up the south side of Balcom, because the north side looked pretty darn intimidating, and Mark warned me as we rolled away to be careful... 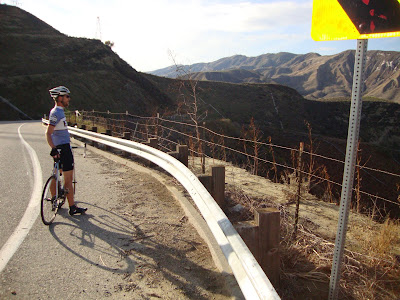 If you look to the right of the photo, you can see the downhill that we're about to do. There are some really steep pitches near the top, and I was riding my brakes for the first half of the way down just to be on the safe side. 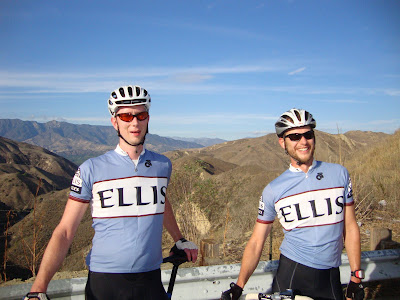 One more quick shot of Team Ellis before the descent! 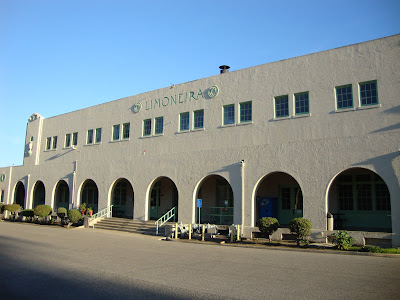 Once we got back down to the valley, we took a quick detour through a Limoneira , (a lemon orchard). A beautiful old building, and it is amazing to see all the rows of fruit trees heavy with green lemons.

By this time, both Steve, myself and Mark were all starting to feel the affects of the long ride, so we slowed it down a bit, and Mark pretty much pulled our sorry butts the rest of the way back to Ventura! When we left, I thought the ride was going to be around 40-50 miles, and I figured that would be plenty, as I haven't been doing many long rides as of late anyway. It turned out that when we rolled into Steve's condo, my computer read 62 miles, just a tad more than I had anticipated, and we were both pretty wreaked! 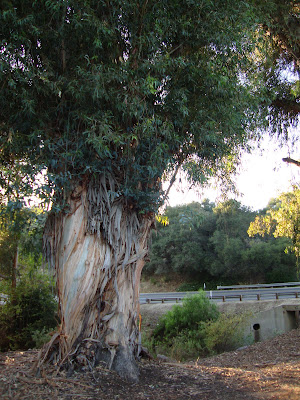 My last shot of a huge Eucalyptus tree just as we were leaving the Limoneira.

Wish I were there with all of you. Thanks for the write-up.