4th at the Minnesota State Championship

Well, I haven't been keeping up with James' cross racing exploits, so here's a recap of the past few weeks. 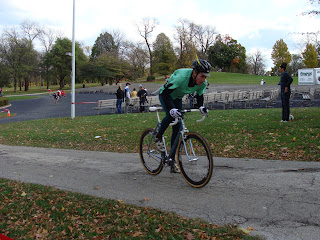 At the Washington park race on Oct. 26, James scored a 4th place. This being right before Halloween, James rode as Peter Pan, and managed to keep his sword with him through the entire race!

The following weekend was a double header with Kletzsch Park on Sat. and Eastabrook on Sun.
Unfortunately, I had to work on Sat, but Al Haas took some great photos of the race and James on his way to a solid 3rd place. 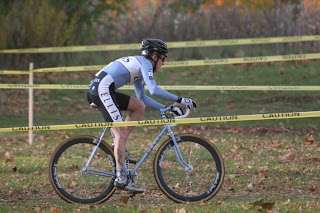 Sunday at Eastabrook was a fun day because Lisa and I borrowed a tent from Vince at Ben's and set up a little Ellis Cycles display right along side the course. Met a bunch of great folks, helped out with some mechanical stuff and got to watch James take another 3rd! Unfortunately in packing the tent, tools, bikes and other stuff, I forgot the camera, so both photos are from Sat. 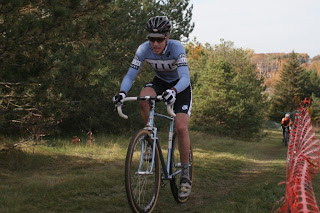 On the 9th, James went south of the border into Illinois to race at Northbrook and took a 2nd place.

Finally, this past Sat. he jumped the border into Minnesota to ride their state championship and after a race he described as "faster than any Wisconsin race" he'd done, he took 4th. Congratulations James!

For a play by play of the championship, check out; http://www.bikethrow.com:80/i/2008/11/15/sone-repeats-and-lemieux-captures-state-cx-titles-at-bassett-creek/. I liked the description of James' sweet single speed, but I admit I'm biased.

The cross season is winding up, but it should just get more exciting from here. Next weekend is the WI state championship in Hales Corners, and we'll be there cheering James on. After that it's on to the Illinois championship in 2 weeks and then on to the Nationals in Kansas City on Dec. 14th. Lisa's got the time off and we're planning on making the trip, should be fun, and we'll see you there!
Posted by Dave Wages at 11:58 AM