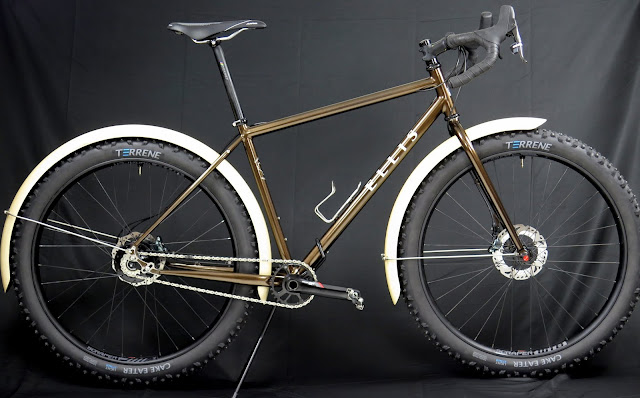 I haven't posted on the blog in the long time!  Facebook and Instagram are great, but after a ride on this new bike I felt like it deserved more than just a couple sentences and some pictures on the Book of Faces...

Ryan placed an order last spring for a fatbike so he could ride through the winter on the icy gravel roads around his Central Wisconsin home.  Knowing that riding a fatbike on the road can be a bit ponderous, I suggested that he give one a try before he committed to that platform for his new bike, and after a brief ride he agreed that might be too much bike for what he wanted to do.  I suggested a 27+ wheeled bike (essentially 27.5x3.0" tires with studs) might be better for what he wanted to do.

From there, we discussed the drivetrain, and while I am a big Di2 booster, he settled on a Rohloff internally geared rear hub.  I've done a couple Rohloff bikes while I was at Waterford, and one complete 29+ build back in 2015. 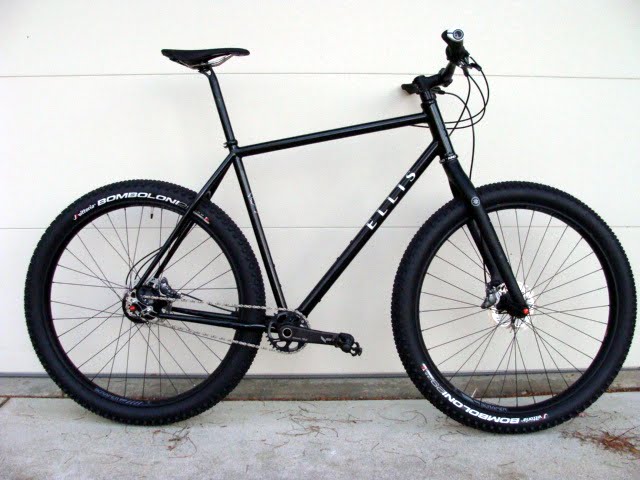 Kevin's Rohloff 29+ turned out great, but we didn't want to use flat bars for this build, so I started doing my research to see what our options were.  Thankfully, the Rohloff hub is well loved, and lots of designers have been tinkering with different shifting options for just about any handlebar setup you can imagine.  The Gebla Rohbox jumped out at me as it can be operated with modified SRAM road shifters, and Ryan was on board.

Now we had the wheel size, drivetrain and shifting setup, there was just the final hurdle that Ryan had requested, FENDERS!  Back to the interwebs and I found Mark Koenigsfeld and the custom wooden fenders he builds under the MK Fenders name.  These fenders are fully custom, from the radius, the width, the species of wood that you'd like, to custom paint and graphics, so I knew that I'd need to have my wheels in hand in order to get the specs exactly right.  With a Rohloff hub, the bike is essentially setup like a singlespeed with just a single chainring up front mated to a single cog on the hub in back.  This requires some way to tension the chain, enter the same Paragon Machine Works Rocker dropouts that I used on Kevin's 29+.  Since the rear wheel would have the potential to move through a range a positions I knew I would need to have the fenders built with a little extra radius to accommodate these adjustments.  Math ensued, and I forwarded on my numbers to Mark at MK so he could get started on the fenders.

The fenders also presented a question for the fork, was there an aftermarket fork that would easily work with these wheels and allow clearance and easy fitup for the fenders?  I did find a Surly fork that would have worked, but it had so many bosses it would have made Frankenstein jealous. It was not the look that Ryan or I were looking for.  I dropped a note to Steve Garro at Coconino, the master of the filleted unicrown fork, and he gave me the inside dope on which blades work best and how to proceed with building my first unicrown fork! 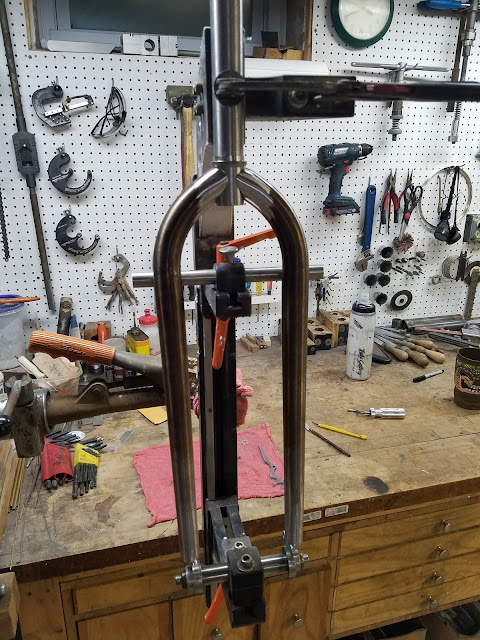 Mitering the blades was slow going as I gradually ground each side and dry fitted them, careful to make sure the clearance was the same on both sides.  After brazing, I finished the fillets up super smooth and checked the fit of my front wheel with the studded 27+ wheel.  Still plenty of room for fenders in there! 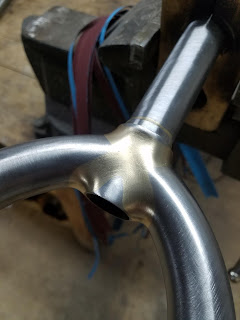 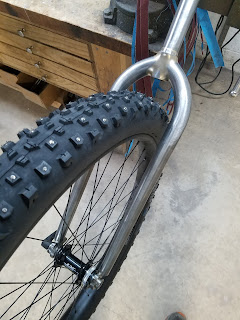 Another consideration for the frame was the unique cable routing required for a Rohloff hub.  I knew that I wanted the routing to be internal if possible and as always, smooth and clean.  The twin cables for the shifting would run inside the top tube, entering from opposite sides of the head tube and underneath the top tube. 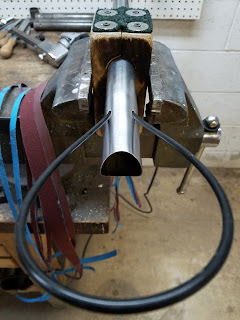 The underside of the head tube end of the top tube. 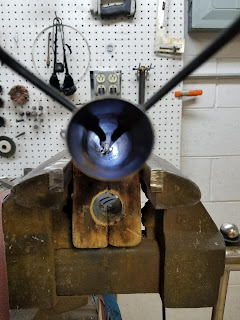 Running two separate brass tubes through a 31.8mm top tube is tricky business, if either of these touches the tube wall or the other internal, they will rattle terribly when the bike is ridden.  Much easier to fit up and braze them in to the raw tube so I can see what's going on inside there!
Below, the exit points where the two separate cables will head down the seat stay to the rear hub. 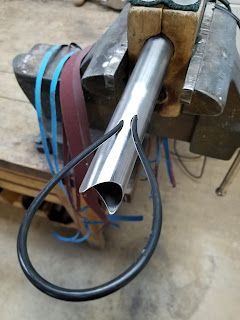 The rest of the frame came together fairly straightforward, I just had to make sure the chainstays allowed for enough tire clearance on the inside, and chainring clearance on the outside.  The resulting chainstay fillet turned out very pretty. 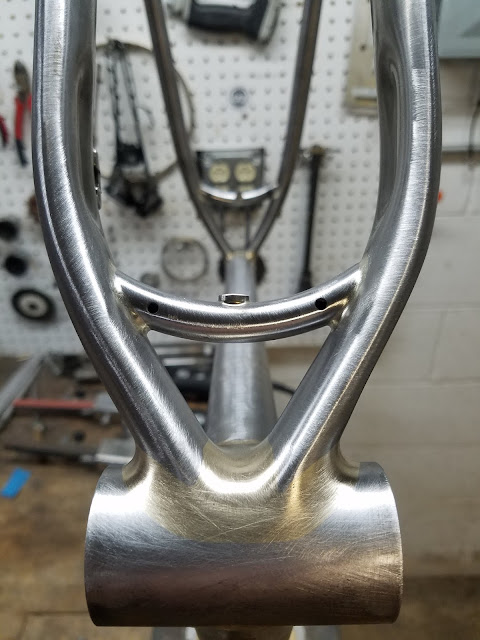 After plenty of the elbow grease the frame headed off to the powdercoater for a Bronze Chrome finish, and then the build.... 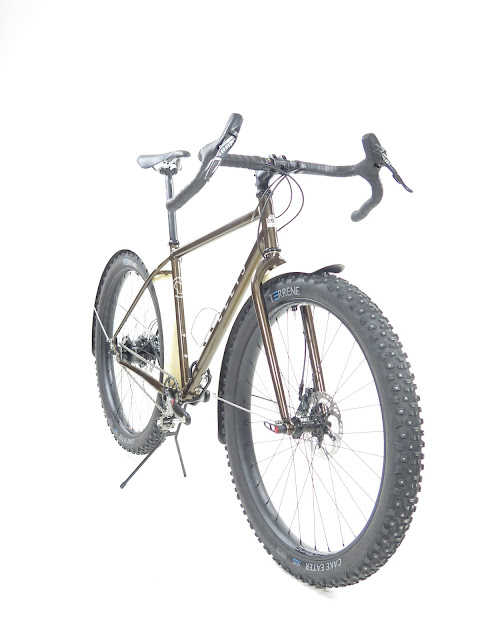 Super pleased with how this one turned out, all business from this angle! 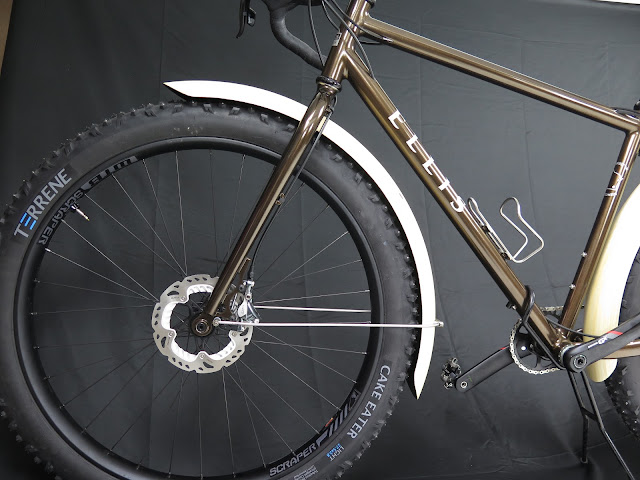 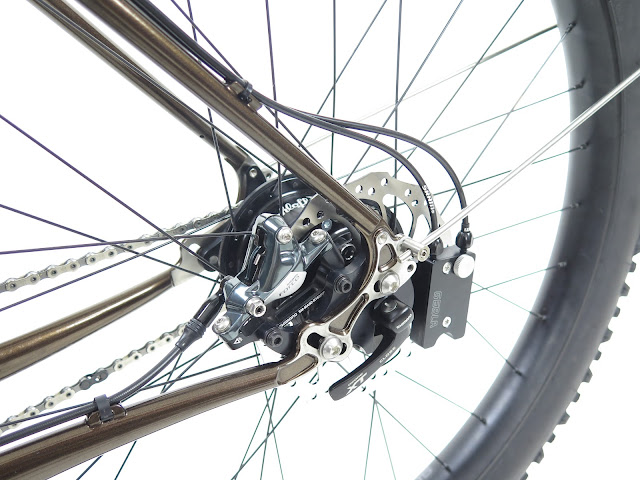 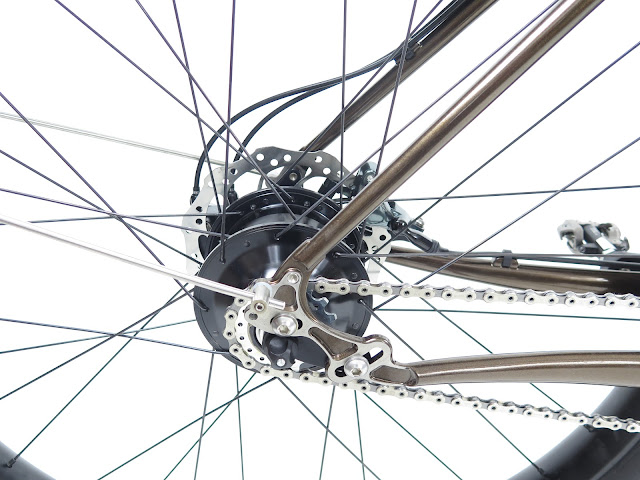 I think my my favorite detail of the build is the internal cable routing and the super smooth routing throughout the build.  Up front, the cables loop around the head tube, but don't rub at all. 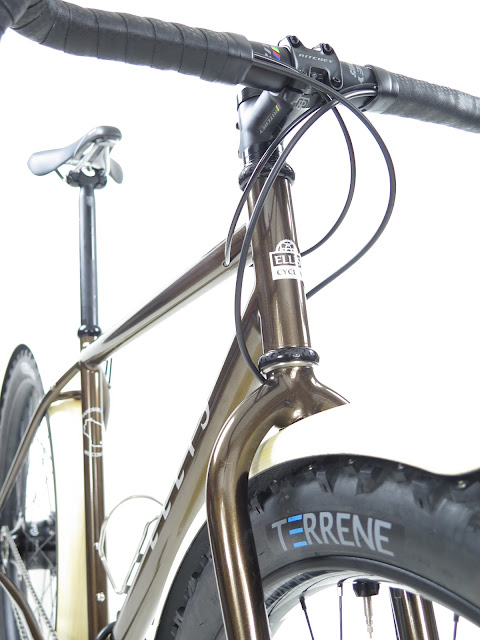 No interference, just everyone headed where it needs to go! 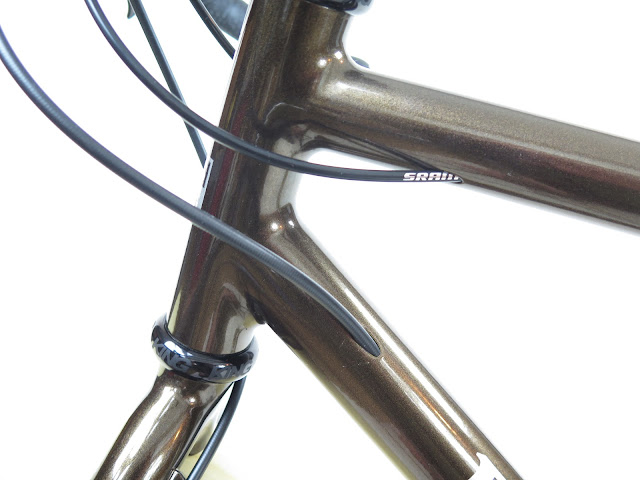 The front brake loops around the back of the unicrown, leaving the super smooth front uncluttered! 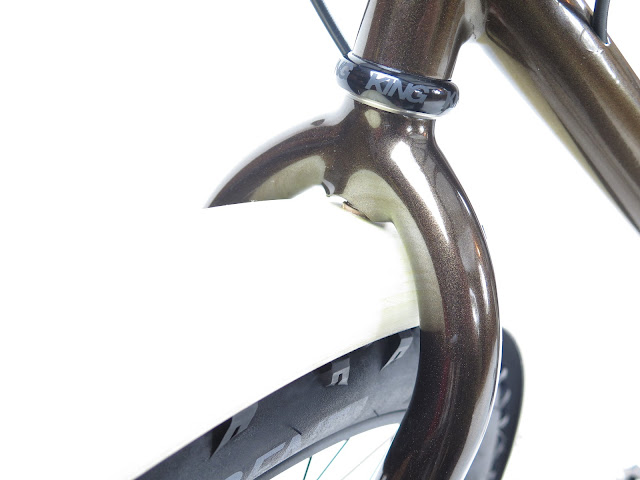 The shifter cables exit and run right down the left seat stay into some double housing clips from Paragon! 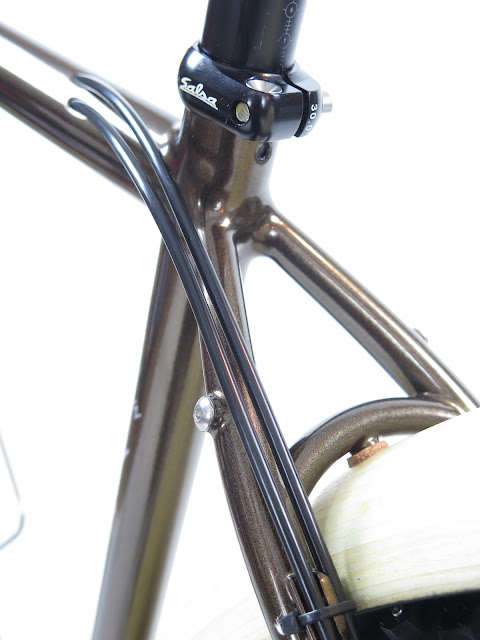 I took the bike out for a ride this afternoon on the bike path that starts about a block from my shop.  The path included some pavement, snow, ice, and eventually it turns to frozen dirt and ice.  The studded tires were a revelation on the ice, zero slippage!  I'm also really stoked about the Rohloff/Rohbox setup with the SRAM shifters, so simple and clean, I could see riding a bike like this a whole lot through a Wisconsin Winter!

I got to see this bike in person earlier this week, and it is really amazing! It's a perfect example of Dave's ability to generate elegant solutions to new challenges... the cable routing is a work of art, the rear rocker dropouts, brake mount, Rohbox, and fender mounts are all beautifully integrated, and the filets are like glass. The new owner is very lucky!

Thank you for sharing your first bike experience with us. I also purchased the best best full suspension mountain bikes under 1000. My experience is also nice. Every day, I commute by bike.