Paul's take on the "Modern Classic" will be a light touring bike with mounts for fenders and racks. As you can see, I've got the tubes all mitered and ready to go, I've just been waiting for the head lugs to arrive. They showed up last week, but I've been distracted with my display stands for the NAHBS show which is coming up soon! More on the displays later... 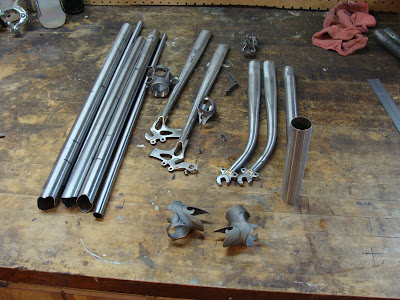 Here's the Pacenti Artisan top tube lug after some solid carving time. I haven't used one of these lugs for quite a while, and I noticed that he's changed the casting a bit to give more of a radius to the transition between sockets, nice! Should make polishing easier too. 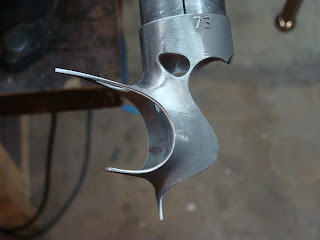 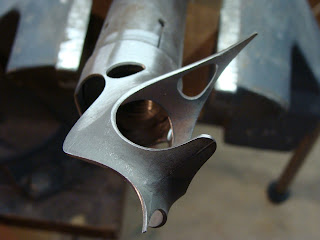 OK, here's the other project that's been taking me away from my building duties. I originally planned to make some basic stands to display my complete bikes on for the show. Just plywood with some trim, no big deal. As I'm working on the basic parts, I mentioned to Lisa how I wanted to cut an arch out of the sides to make it a bit less "boxy". She immediately threw out the idea, "why don't you make it look like a lug"? Pretty good idea, but much more involved from the construction side. I even ended up making a steam box to bend strips of wood for the trim. See what I mean about more involved? 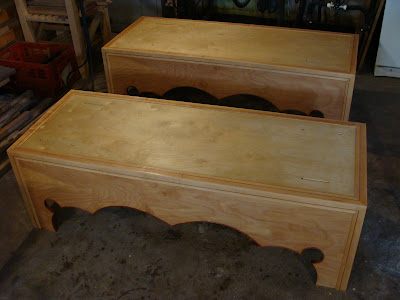 At least they're close to being done. Hopefully one more coat of finish tomorrow and they'll be done. I'll take some more photos with the bike mounts as well, and if you're at the show, stop by and see 'em. The bikes on top should be nice too!

Um, do you make coffee tables?

Yeah, but your coffee can't handle my table!