Here's the first couple of shots of Rafael's new frame.

He wanted a sloping top tube, so I used the Llewellyn slant six lugs for over sized tubing and did a little customization. He also chose to do the Ellis dropouts, and I finished them a bit differently this time around. I should have some close ups soon. 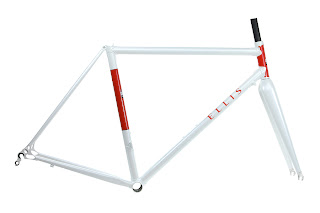 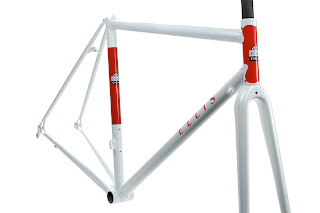 I didn't notice until my wife mentioned it to me, but I passed a bit of an anniversary this past week. It's been a year since I left Waterford. I've been thinking more of the upcoming anniversary of Ellis' incorporation, but it did get me thinking about all the things that have happened over the past year.

Hopefully 2009 will be a bit less stressful, but no less eventful. We've got the NAHBS (http://www.handmadebicycleshow.com/) coming up and after that I'm looking forward to the Cirque in June. http://www.cirqueducyclisme.com/

It should be fun to see some old friends and make some new ones. Hopefully I'll remember your names too, although I'll warn you, I'm terrible with names. ;-)

Here's to a great 2009 and many more miles for Ellis Cycles!