A friend of my recently talked to me about building a 29er frame that would double as a touring bike. I did some drawings with his specs and it piqued my interest in a similar project. I haven't had a mountain bike since I sold mine 4 years ago, and I've never really had a touring bike. this seemed like a bike that could fill both needs without filling the garage with 2 bikes that might get a minimum of use.

I spent some time researching 29er and touring geometries and I think I've come up with a nice blend for this frame. The next step was deciding on parts, disc vs. cantis, and other bits. I finally settled on canti's and also found a slick way to use Campy long slot dropouts so this bike could be run as a single speed. In fact, I plan to display it at the NAHBS that way.

OK, here's the frame and fork. 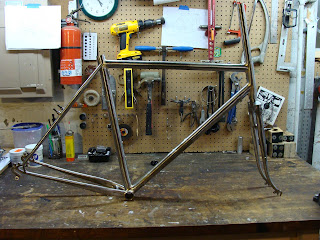 I love the shape of the Pacenti fork crown, plus it allows for the classic raked fork. If you look under the crown you'll see my tricky fender mount. I may not use it often, but it'll come in handy if I ever need it. I also added rack mounts for versatility if I ever tour on this bike. 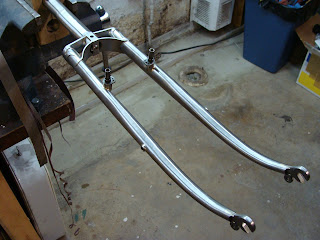 I wanted to have as much clearance for fat mountain tires as I could get. I mocked up the chain stays and spent some time deciding exactly how wide I could go. The seat stays are 16mm double tapers that I custom bent. I also made a small bending fixture for my seat stay and chain stay bridges, both of which also have fender mounts. 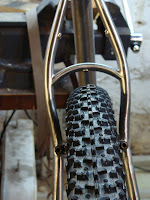 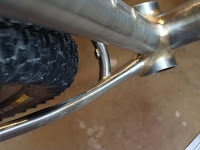 Fillet bottom bracket, always a joy to finish... I also added the little cable guide under the chain stay to get the cable past the bend without snagging on the knobbies. 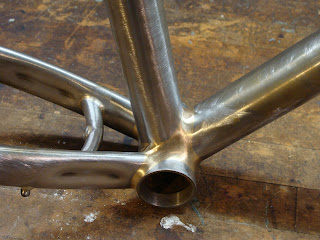 Here's the retro dropouts. I sized the chain stays so a 2.3 tire just drops out before hitting the seat tube. I also made sure the slot was as close to perpendicular to the seat stays as possible. Now when the wheel is moved back and forth in the slot it doesn't affect the brake pad position. Finally, I modified a Surly Tuggnut to tension the wheel with these dropouts. The screw countersinks into the existing hole on the Campy dropouts. 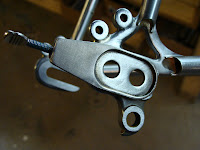 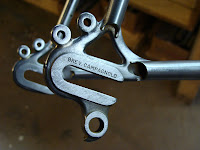 Finally the fillet brazed head tube. I played around with removable cable guides for when I run the bike as a single speed, but I finally decided to just add a couple split guides on the down tube. Not super clean, but functional. 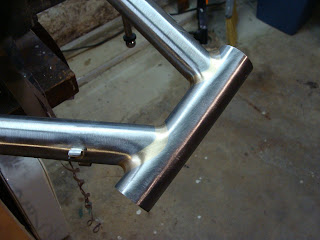 Very nice, even if it was sort of my idea! You are lucky I am long on ideas and short on follow through. Still, you know you will pay for that one way or another down the line.

Paint the bike Ellis blue like James' CX. That is a SWEET color.

Very cool Dave! I'm looking forward to seeing it painted and built up for the show.

Fork crown in a contrasting color?

That is an awesome frame. I would go for something like the Vanilla Speedvagen cross; matte green with a lighter highlight where you want it in red(maybe). That frame style might look good with a straight steel fork and some paragon drops as well.

I thought about the Paragon dropouts, and finally decided to go simple with the v-brakes. I'm open to the Paragons if customers want them and I'd probably do a segmented fork if folks want disk brakes up front. I think this fork would be way too flexy with a disk.

Thanks for the love and the color suggestion, you'll have to wait for the Handbuilt show to see what color I choose.

Indeed it's an awesome frame but I liked gt aggressor pro mountain bike frame more awesome to be honest.