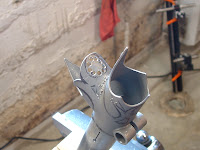 Things are moving along at Ellis Cycles. The current project is a fixed gear road frame with fancy stainless lugs. I tried to take photos through all the stages, but I must admit, I find it hard to stop and take photos once I'm in the groove of carving.

The seat lug begins with some 1/8" holes to perforate the area to be removed. 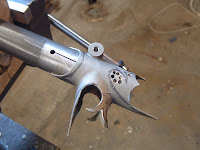 Moving around the lug, more large chunks of metal to remove. You'll see on some of the lugs, I started with a design roughly drawn on the lugs, but I deviated on some of them. Chalk it up to inspiration. 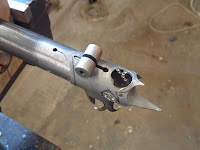 The beginnings of a design. 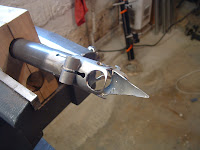 Removed a chunk and thinned down the center. I have to give credit to J.P. Weigle for the large loops on the back of this lug and the underside spoon of the other lugs. I saw his design on Kirk Pacenti's site and always liked it. 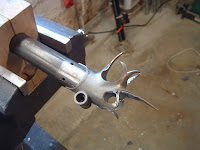 Moving on to the sides, cleaning out the large loopy openings with the die grinder. 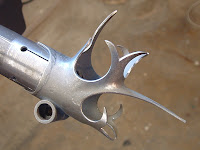 The finished lug. Admittedly I missed a couple steps, but you get the idea. 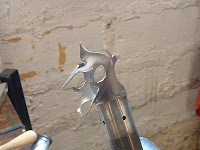 On to the head lug, I'm already pretty well into the carving here, but pretty similar to the seat lug in the early stages. 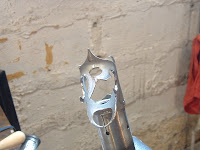 A shot from the down tube side, just beginning to take shape. 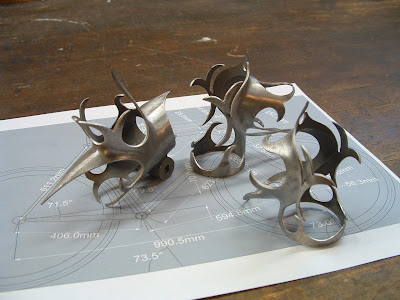 Beautiful lugs Dave. Sure to get four stars from The Inspector and the client!