Jason dropped off the latest Ellis, this one is destined for Brad in MN. If you're doing RAGBRAI this year, you might just get to see this beauty!
It's got the new eyeleted Ellis dropouts which are pretty sharp if I do say so myself, and Brad choose some really nice colors for his paint scheme. Subtle, but classy.

I thought I should throw in a shot of my recently repainted cross frame, it's been seeing alot more duty lately as a commuter and I also used it on the recent century ride I did in Freeport, IL. 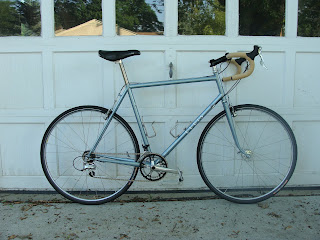 Here's the guys from Freeport and myself prior to the 100 miles. From the left, it's Mike?, Andrew, me, and Dave. 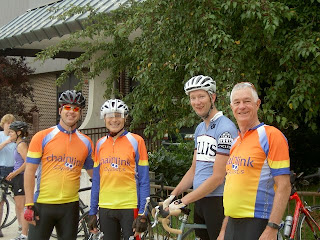 Dave shot ahead on this hill and I couldn't figure out what he was thinking?, a breakaway? He jumped off at the top and took photos of the group cresting "Binkley's Bonk". It doesn't look like much, but it was a steep one! 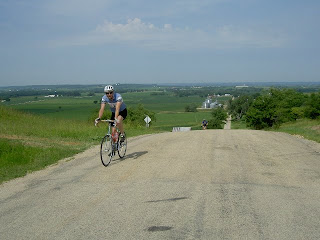 Finally, going all the way back to June, here's a couple shots from the final day at Cirque. I was positioned right by the door at the fairground again this year, but thankfully the temps were much more enjoyable. I didn't bring any real "show" bikes this year, all three of the bikes pictured are my personal rides, and the frame on the table is Murdo's "Modern Classic", pretty similar to the NAHBS winning frame, just a little smaller. 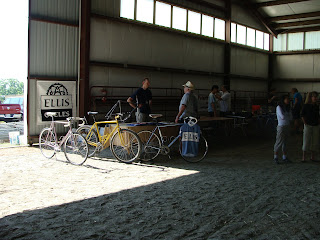 I had a great time at the Cirque, definitely felt more comfortable this year and got lots of positive feedback about my talk on Sat. I'm looking forward to next year. 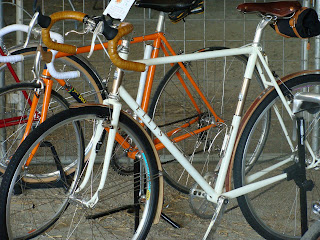 Paul made the trek up from NC, with his Ellis which was on display in the craftsman category, it was named runner up in the "singlespeed / track" category that the Ellis "ghost" frame won last year. I think Paul's is just and pretty in it's own right!
Posted by Dave Wages at 7:29 AM